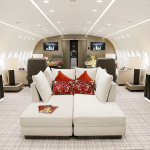 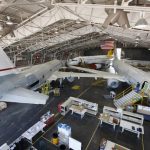 Airbus Corporate Jets and the Italian hypercar Atelier Pagani Automobili are announcing a new cabin design for the ACJ319neo, called Infinito, at the EBACE show. A key feature of the Infinito cabin is its sky ceiling, which can bring a live view of the sky above the aircraft into the cabin – or display other images. This creates even more of a feeling of airiness … END_OF_DOCUMENT_TOKEN_TO_BE_REPLACED 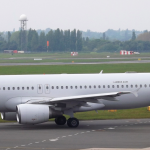 AMAC Aerospace has performed a refurbishment of an A320 commercial airliner to a VIP completed interior. The cabin was completely removed, inspected and refitted with custom furniture that included a master bedroom with lavatory, ten new VIP seats and four new divans convertible into beds were installed and the remaining economy class seats refurbished. Additionally two … END_OF_DOCUMENT_TOKEN_TO_BE_REPLACED 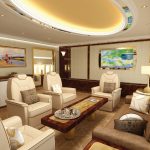 Lufthansa Technik completions is soon to release design concepts for the VIP variant of the Airbus A350 XWB. Lufthansa performs narrow and widebody VIP aircraft completions at its base in Hamburg, Germany; to date the company has performed VIP completions on some 60 narrowbody commercial aircraft and 30 widebodies. It is also expected for the company to release news about … END_OF_DOCUMENT_TOKEN_TO_BE_REPLACED