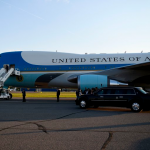 US President Donald Trump has confirmed the news that he is redesigning the USA presidential aircraft, Air Force One in red, white and blue. The two Boeing 747-8 Air Force One aircraft on order are reported to be completed and delivered to service by 2024. In an interview with CBS News, President Trump said the new Boeing planes will be "red, white and blue, which I think … END_OF_DOCUMENT_TOKEN_TO_BE_REPLACED