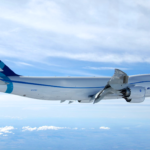 The Asia Aerospace International Expo & Congress 2011 opened today (8th March) at the Asia WorldExpo Centre in Hong Kong to a flurry of Far Eastern based orders. Among the orders placed of interest are x2 Boeing 787-8’s for VIP use, placed by HNA Group’s Hong Kong Airlines. In addition to the two 787-8 VIP’s, HNA Group also plans to purchase thirty 787-9 Dreamliners and … END_OF_DOCUMENT_TOKEN_TO_BE_REPLACED