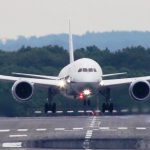 The FAA has issued a requirement to fix 787-8 and -9 Dreamliners that are powered by General Electric GEnx-1Bs in order to prevent damage caused by fan ice shedding. The requirement is for Boeing to repair aircraft utilizing this type of engine, along with revisions to the flight manual. The FAA Airworthiness Directive (AD) follows a March directive that was prompted by a … END_OF_DOCUMENT_TOKEN_TO_BE_REPLACED