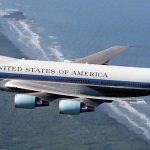 And why the costs are not Boeing’s fault.   On the 6th December 2016 news broke of a Donald Trump tweet relating to the U.S. presidential fight wide-body aircraft ‘Air Force One’. The elect president Trump tweeted: "Boeing is building a brand new 747 Air Force One for future presidents, but costs are out of control, more than $4 billion. Cancel order!" The x2 Boeing … END_OF_DOCUMENT_TOKEN_TO_BE_REPLACED