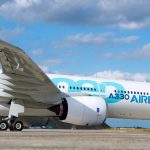 The A330 story opens a new chapter today as the brand new A330neo variant completes its maiden flight successfully landing at Toulouse-Blagnac Airport, France. The A330-900 variant completed a 4hr 10min flight kick-starting 1,100 hours of testing. The wide-body A330neo family is composed of two models; the A330-800 neo and A330-900 neo aircraft. Airbus expects to obtain EASA … END_OF_DOCUMENT_TOKEN_TO_BE_REPLACED