LT has come up with a proprietary seat seat design using carbon-fiber construction to trim weight and eliminate the bulky choices of seats that are in production. 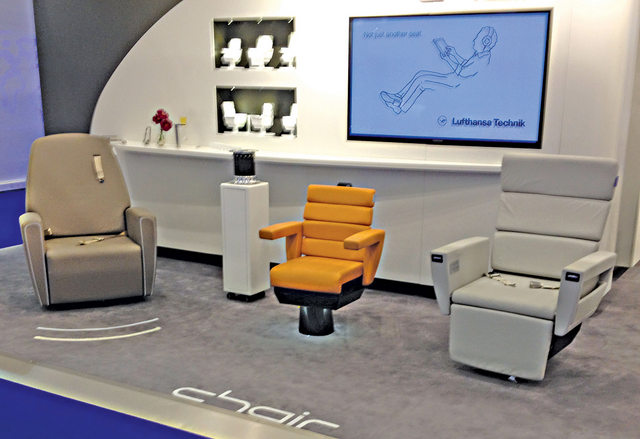 Lufthansa have worked alongside Pierrejean Design for initial concepts that included styles such as office, classic and lounge.  VIP customers can choose from a large selection of headrests, backrests and footrests, along with armrests with attachments for tables, cup holders and computers.

This gives customers a choice of more than 8,000 possible configurations as well as more ergonomically and luxurious for those long plane flights.

The company also has a Boeing 747-8 and 787 Dreamliner in work at the moment with a long history of completion work on narrowbody business jets.

It has been a busy year for ST Aerospace’s VIP completions subsidiary, AERIA Luxury Interiors, with the announcement at NBAA that they have signed a maintenance contract for Boeing 757-200 VIP Head of State aircraft.

The work will be performed at their San Antonio, TX headquarters and will include mod work on engine inlets and an avionics upgrade and is due to be delivered at the end of 2014.

AERIA also has work at its facility on a green 737 BBJ and a complete VIP  wide-body aircraft.

VIP customers that want to pick out options for their new Falcon aircraft can do it in virtual reality. They pick out their carpet, seats, displays and other amenities in a large conference room with walk-through cabin configurations and renderings.

This is done with data used from the design engineers 3-D mockup and will help better understand the customers needs and desires, ensure a faster completion without  the need for rework and avoid confusion in the process.  This makes for a smoother process and a happier VIP client.

Comlux in Indianapolis, Ind. is expanding it hanger to counter the rising demand for more VIP wide-body aircraft completion work.  This will allow them to take on work for all widebodies with the exception of the Airbus A380.

The company can now handle work on 5 narrowbodies at one time and now has work in progress for 2 ACJ320 and a BBJ.  The new widebody hanger will round out their capability to take on more work and still be able to complete tight schedules.

With the recent addition of the G500 and G600 aircraft to the Gulfstream offerings, customers on the West Coast can now be supported in Long Beach for selection of cabin interior and paint options.

The company has had a long presence in Long Beach with a completions center for G550 and G650 models in addition to a service center for all Gulfstream models.