MEBA the Middle East Business Aviation expo was held in Dubai on December 8-10th with the aircraft completion news highlighted below. 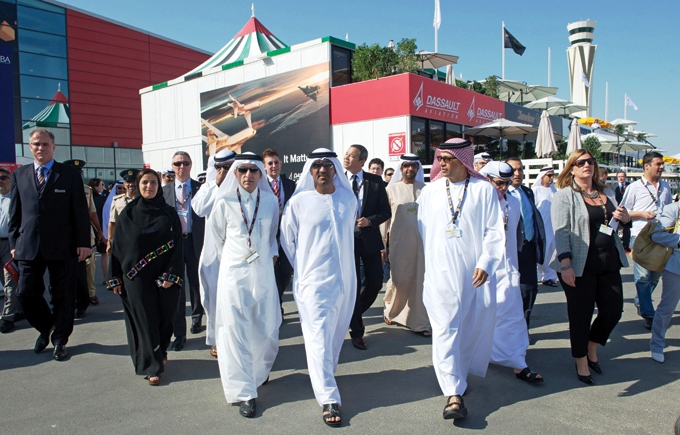 Greenpoint Technologies made a splash at MEBA by showing off its scale model of the Boeing 787-8 Azure Dreamliner.  In addition to a luxurious master suite and private office in the forward area, it also boasts 2 aft suites for guests to stay aboard.

This is a creation of the GT design team along with Seattle designer Julie Adams and involved cooperation with the engineering and certification teams to cover the technical requirements of each component.  The scope was massive as it included working with the design of the ceiling, sidewalls and windows along with plumbing and electrical systems.

The result is a wide open concept that is still elegant with the use of woods such ebony and sycamore along with polished metal and marble.

AMAC announced that it is begun construction on a new hanger for wide-body aircraft, which will increase their hanger areas to a total of 38,100 square meters.

The hanger will be completed by the end of 2015 and will be used primarily for maintenance work, as they see this an area for continuing growth.  AMAC has delivered 10 VVIP projects so far with a Boeing 777 scheduled for delivery by the end of the year and Boeing 757 and Airbus ACJ319 to be presented to customers in 2015.

They include a reconfiguration of a cabin for a Boeing Business Jet and a nose-to-tail refurbishment of a VVIP Airbus A320.

The Airbus A320 is configured as an airliner at the moment but will eventually include a master bedroom and bathroom, which will come with a shower.  Other amenities added will be a inflight entertainment system with video on demand and WiFi.

The BBJ conversion will include a VIP lounge with a separate seating area, new side ledges and tables.  Other additions include berthable divans as well as coffee tables toward the aft section of the plane.

GDC has significantly expanded it capabilities by acquiring PFW Engineering Group, which will help with engineering and certification of the next generation airplanes rolling out such as the Boeing 787. This move will help GDC not only do more completions but also do maintenance services that it was unable to accomplish  in the past.

GDC also have plans to open facilities in Europe, Africa and the Middle East to better serve its clients in an efficient and timely manner.

Airbus released new details of its Airbus A330 Summit configuration building on the news several weeks ago on this VIP version geared towards private and government clients who desire a quick turnaround on completions.  It consists of pre-configured cabins of different styles with a master bedroom in the forward section, office and conference rooms in the mid-section with seating toward the rear of the plane.

Depending on the configuration, fly off costs inclusive of the jet could be under $200 million with a delivery date as early as the start of 2016.

Aeria was made its appearance at MEBA with a specially designed display along with tablets loaded with plans for outfitting cabins.  The booth consisted of large screen monitors with presentations, renderings and animation of Aeria’s capabilities in completions and refurbishments.

Since Middle East customers tend more toward designs that are high quality and extravagant, they wanted to show potential clients the depth of their design work as well as tout their experience in the maintenance of VIP airplanes.

Designed by Jet Aviation‘s team and work done and certified at its completion center, the plane was ready 3 months early and is currently undergoing custom painting at Jet Aviation’s in-house facility.

A portion of the time savings was in the installation of the sound-proofing that resulted not only in a quieter cabin but also a 30% loss in weight compared to other processes.  The VIP plane can hold up to 13 passengers as well as a full crew with amenities such as a galley, master bedroom with bathroom, an area for guests and dining room & lounge.

DWC has signed a contract with STTS Group, based in Blagnac, France, worth an estimated $40 million US for a facility that will serve narrow body and business jets as well as VIP aircraft.  It could also expand in the future to include space for wide body aircraft.

This will be the first independent facility to handle OEM-approved painting services in the Middle East and is scheduled to be completed by the 1st part of 2017.

Comlux announced a contract for a wide body completion of an Airbus A330 that is to be outfitted with a VIP interior and scheduled for deliver in 3rd quarter of 2015.

In order for this work to be done, they have started construction of a hanger extension which will also be able to serve other wide body completions.  The addition of more than 2,500 square meters will provide enough space for a Boeing 747 and up to an additional 6 narrow body aircraft.

Also, the Comlux Aviation Group has ordered 2 BBJ Max 8’s for their charter division, with the custom interiors being done by Comlux America. This version of the Boeing 737 allows for longer flights with a lower cabin altitude, so VIP clients enjoy more comfort and ability to fly nonstop.

Marshall hoped to appeal to potential Middle Eastern clients with the addition of wide body aircraft VIP completions as this segment is growing rapidly.  They are looking to include this service in 2015 in addition to their existing MRO specialities.

This work will be done in Cambridge and the hanger is being reworked for an new paint facility for aircraft up to the size of a Boeing 747 and also a interior completions area.

Abu Dhabi-based Falcon Aviation is building a 13,705 sq m facility at DWC that will provide customized services to VIP clients that will have a hanger large enough to accommodate an Airbus A380.

Scheduled to be completed by 4th quarter of 2015, it will also include a VIP lounge, offices, workshops and design studio for its customers.  Falcon is partnering with Bombardier, CDG, Rockwell and Integrated Aerospace Alliance in the development of the centre.

Fokker Services, based in the Netherlands, was selected by Boeing to do a Head of State VIP completion for an undisclosed Asian client.  The green aircraft is due to arrive at the Fokker facility in October 2015 and redelivered in August 2016.

Rockwell Collins is taking on its largest installation of Venue in a VVIP ACJ340-600 that is to be used as transport for an undisclosed Eastern European government.

The system will include video and music streaming throughout the cabin for both IOS and Android devices, large high definition monitors in selected areas and seat back monitors for passengers in the rear of the plane.