You are here: Home / Connectivity and Entertainment / Satcom1.TV can Live Stream TV Channels on VIP Aircraft 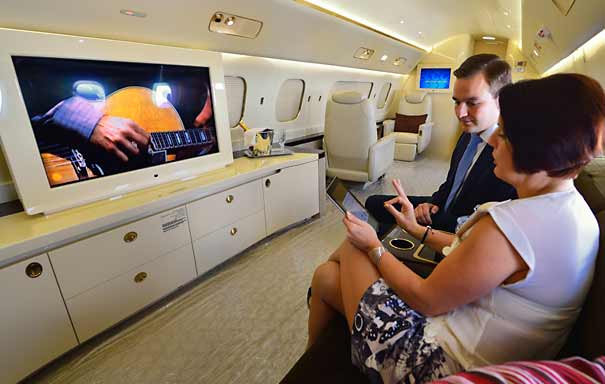 Satcom1 is now enabling VVIP and head-of-state aircraft customers the ability to watch their favorite TV channels real-time, while in-flight. The service called Satcom1.TV was launched in May 2015 and examples of supported service include Apple TV (UK/USA), Sky Germany, Sky Italy, Sky UK, Orbit (Arabic) and Viasat (Denmark, Sweden, Norway), along with several others.

Satcom1.TV is based on IPTV technology so channels can transmitted via an internet connection and requires a high-speed service solution installed in the aircraft.

The Satcom1.TV service can be delivered to anyone, who has a router platform with the Satcom1 AvioIP software which provides SBB aggregation (bonding of two channels), as well as Swiftbroadband of minimum two channels onboard. Alternatively – KA-band installation (coming in Q2 2016 with first installations of JetWave KA-band hardware being completed). On top of that, Satcom1 must be contracted as an airtime provider by the client.

Satcom1 has now delivered this service to Airbus, Boeing, Gulfstream and Bombardier business jet owners. First service launch of Satcom1.TV has been made on a head-of-state Airbus A340, owned by an undisclosed client.

Karina Larsen, VP and co-founder of Satcom1, states “I am extremely proud of Satcom1’s team, who has made the Satcom1.TV network fully operational on 800 kbps data speed by using only 2 aggregated SwiftBroadband channels. The client has been very satisfied to receive his preferred IPTV channels onboard via Satcom1.TV. Certainly Satcom1 strives to facilitate even better quality solutions moving forward. It is always our prime focus to provide the best quality of service, which is simultaneous on several devices on board e.g. laptop, iPad and TV screens.e new KA-band. The core channels requested here in Middle East has been OSN, BeIN Sports, SkyUK, which we are proud to deliver to our clients.”

“What is really wonderful” – states Mrs. Larsen – “is that we expect that our customer base will switch into new, much faster and robust satellite solutions, like Inmarsat Ka-Band (JX) or Exede-In-the-Air KA-Band by ViaSat in the coming years. Since Satcom1 has its own ready-to-use IPTV solution, we can easily exceed customers’ needs with more bandwidth. High-Definition (HD) IPTV will be a natural evolution of today’s Satcom1.TV. Once new KA-Band networks are officially in service, the customers will be able to enjoy their favorite channels in superior quality, wherever they fly.”