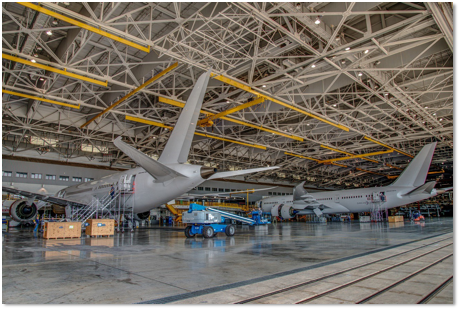 At NBAA 2015, GDC Technics showed off its latest investments and technology breakthroughs for modifying aircraft in the form of its Engineering the ImpossibleSM blueprint.

With the company now expanding to 5 facilities around the world, including a new center opening up in Morocco to service the Middle East, Europe and Asia, an emphasis is being placed on infrastructure improvements and company-wide training.

Among the areas that GDC has made considerable improvements is reducing cabin weights by over 20% with new fabrication techniques such as 3D printing and use of materials like carbon fiber. This provides VIP customers with additional fuel savings and increased range of the aircraft.

A full-scale, 3D interactive virtual reality design interface is also being used at GDC to show not only customers but designers and installation crews every stage of the aircraft modification. This reduces expense of modifications that are normally caught later in the process and enables the aircraft to return to service sooner.

Mohammad Alzeer, the GDC General Partner said “From our cutting edge 3D technology to our new advances in interior weight reduction, GDC’s demonstrated its commitment to innovation and customer care and service, these innovations and new technologies are as bold and forward-thinking as the next-generation for which they are designed to be incorporated in.”