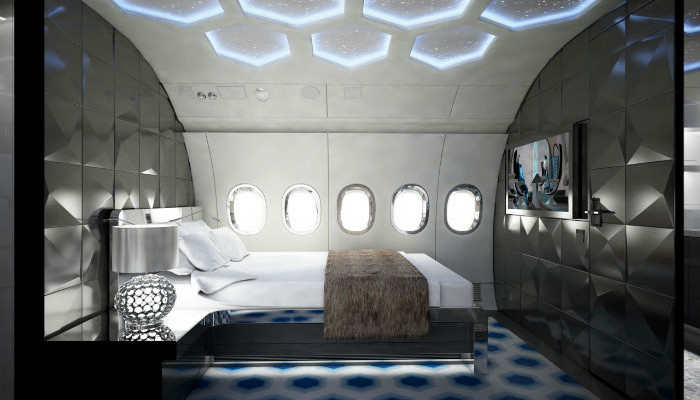 Lufthansa Technik announced they have signed an agreement for the completion of two Boeing 737-700 BBJs with Royal Jet, a private charter company based in Abu Dhabi. The aircraft will be completed at Lufthansa Technik’s VIP & Executive Jet Solutions site in Hamburg with redelivery in Q3 and Q4 2016.

The cabin interior was designed by the New York based designer Edése Doret. The VIP interior will have a private master bedroom along with a fully equipped master bathroom.  A lounge as well as business and economy class areas will accommodate up to 34 guests.

Both BBJs will be have with the latest telecommunication and entertainment technology to meet the needs of the exclusive customer base of Royal Jet.  They are currently operating six BBJ’s and already considered as the world’s largest independent BBJ operator.

“Royal Jet is the benchmark for private charter companies in the region. It is our aim to be the benchmark for global operators offering VIP chartered services” said Captain Patrick Gordon, Interim President and Chief Executive Officer of Royal Jet.

“The company’s continued growth and success is testimony to the vision and leadership of our chairman H.E. Sheikh Hamdan bin Mubarak Al Nahyan, the Board of Directors, shareholders and over 400 of Royal Jet staff who deliver service and operational excellence every day. Our partnership with Lufthansa Technik reinforces Royal Jet’s consistent offering of award-winning service excellence.” added Captain Gordon.

Lufthansa Technik´s Senior Vice President VIP & Executive Jet Solutions, Walter Heerdt, explained: “We are very proud that we have been selected by Royal Jet and also given the chance to materialize the spectacular design of Edése Doret.”